Posted on November 15, 2022 by the press music reviews

Released on this day in 1981, Japan’s fifth and final studio album Tin Drum found the band embracing a new synth-heavy style, but sounded like nothing else at the time.

When English new wave band Japan released TIN DRUM (1981) ★★★★½, they finally became the band they always wanted to be: an art-rock band with searing musicality. With this album, Japan’s sound had by now become rooted in synthesizer and it is their most Eastern-influenced release. It is also arguably the band’s best album, and is considered one of the more important albums from the early-80s British New Romantic era. In retrospect it is a definitive statement on pop music meets modern electronica, with an exotic inspiration coming from Asia or, more precisely, China.

Tin Drum is an intricate collage of arty soundscapes and exotic instrumentation. There are no trashy glam flourishes like their obscure debut ADOLESCENT SEX (1978) ★★★, and is free of the at times awkward Bryan Ferry posturing on GENTLEMEN TAKE POLAROIDS (1980) ★★★★, this is an album with its own voice, with not a sound out of place.

With communist China as a loose concept, the album is crammed with icy electronics, polyrhythmic percussion and traditional oriental instruments, reinforcing the Red Army concept, and on album highlight ‘Canton’, conjuring images of rural peasants struggling to survive amidst the new order. And then there’s David Sylvian’s graceful vocals, and his brother, Steve Jansen, birth surname Batt, with his tightly structured drumming style. Sylvian found his voice here, his words flowing over the top of synth washes on lovely songs like ‘Visions Of China’, drawing you into Japan’s strange, fractured sound.

Their most beautiful song, ‘Ghosts’, a UK top 5 hit, is here too. Unlike the other songs on Tin Drum, this haunting track is a deeply introspective, ethereal, and finds Sylvian reflecting on past loves. Achingly atmospheric, ‘Ghosts’ became one of the band’s biggest, and only, hits. Elsewhere, another big standout is ‘Still Life in Mobile Homes’, a strange keyboard and drum-led song that features late-great bassist Mick Karn at his most inventive and melodic, adding icy funk to the spectacular drum and bass-driven track. The album cover finds a perfectly coiffed David Sylvian eating rice from a bowl in a bare room while a peeling poster of Mao looks on.

With personality conflicts leading to rising tensions within the band, and just as they were beginning to achieve major commercial success both in the UK and internationally, Japan split up. Tin Drum was to be the band’s final studio album until the very good reunion project in 1991 Rain Tree Crow, and following a tour they would disband. If you hear one Japan album, the unique and striking Tin Drum should be it. 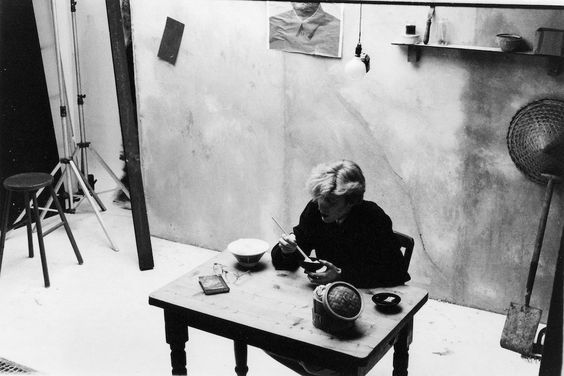 This entry was posted in Japan, On This Day, Top 10 British Synth-Pop Albums. Bookmark the permalink.